Physical Description: These creatures appear as animate humanoid skeletons. Little flesh clings to their bones, and their joints are held together solely by magic. Their eyes come closest to seeming alive. They are normal eyes, typically green or blue, but sometimes brown. These eyes, set within sockets of a barren skull, mark their strangeness. Most of the eleti of Philintis have been raised from the ancient bones of the lizardmen who once ruled this region, but many are human or goblin in origin, especially those who are not from Philintis. 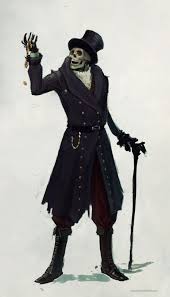 Eleti typically dress to hide their appearance. They favor cold climates, where everyone wears many layers of cloth and fur. While around other races, they try to blend in by covering their faces with veils, masks, or hoods.

Personality: Eleti are envious of the ease with which living folk interact. Most want the life that is denied to them and to enjoy the diverse cultures they can only glimpse from the shadows.

Eleti follow a spiritual path, attempting to attune themselves with their own magical energies. In this way they hope to gain more control over themselves and influence with the world around them. Most eleti go about this in one of three ways. These factions are seekers, judges, and slayers.

Seekers among the eleti strive to help other races and earn respect and trust from the living. Their goals in this effort are to make friends among living races and to help protect the welfare of others. They try to connect themselves to others and appease their sense of longing and separation.

Judges prefer to destroy the unworthy or unjust. Some eleti judges seek out evil undead to destroy. They hope to demonstrate their own independent nature and to differentiate themselves from the monsters they fight. Many others instead hunt the criminal and unjust elements of living society. By doing so, they feel that they contribute to the general welfare and create a place for themselves in the living world.

Eleti slayers see living races as enemies. Slayers operate alone as murderers or may raise armies of undead followers. They lash out at others and become universally feared, even among eleti. Slayers are the epitome of unliving vengeance.

Alignment: Eleti are independent creatures, given to no alignment. They may be malicious, kind, or lawless depending on their own nature. Eleti do not generally trust others enough to reveal themselves. Each is raised by its parent, taught how to move in the world and interact with others. Because of this closeness, an eletum often has an alignment similar to its parent’s. An eletum is an animate skeleton formed from the remains of a humanoid creature. An eletum gathers the necessary magical energy into one of its own bones over the course of a year. It then places the empowered bone within a skeletal corpse that becomes its “child.” This process is somewhat uncomfortable for the parent but not really painful. Eleti do not eat or sleep as a living creature does. They also do not grow old in any noticeable way and do not expire from age. Eleti are, in effect, immortal.

Eleti Lands: Eleti control few lands. They are most common in Philintus, where they have established a nation of their own kind. Requiring no food and feeling no discomfort from extreme environments, the cold forests of the region can be left mostly intact. While they have no material needs and can avoid conflicts over resources, the leadership of Philintis bears a deep grudge against their neighbors, who have hunted the eleti out of hatred and fear for centuries.

When moving through the lands of other creatures, eleti travel with caution. They use masks and disguises when possible and rely on stealth and cunning otherwise. Some eleti find friends among the living. Some people look past the undead face and see the good of which an eletum is capable. Other men of evil nature have no qualms about dealing with undead. Whatever the nature of the relationship, eleti rely upon living friends to conduct business and help them hide.

Religion: Some eleti offer homage to gods of death, believing that they owe their existence to the beneficence of these gods. Others worship
gods appropriate to their skills and interests. Followers of good-aligned deities are rare: These gods often show a vengeful aspect due to the ability of their priests to destroy undead.

Language: Eleti have no language of their own. Most in Philintis speak Casta (the common tongue of Kanos and a pidgin form of Common. Despite the lack of a throat, eleti can speak clearly. Their voices sound human, though there is a subtle hollow ring to be distinguished by astute listeners.

Names: Eleti usually use only one name. Most use human names from the lands around them. Others use more guttural names from orc or
other humanoid tribes. Few eleti use elven or dwarven names, because their intense mistrust of undead makes it difficult for eleti to remain
near those races.

• +2 Dexterity: The magical nature that binds the eleti together gives them great speed and flexibility.

• No Constitution: Eleti are not living creatures and have no metabolism. They do not have a Constitution score, and as a result, eleti are immune to any effect that requires a Fortitude save unless the effect works on objects. A spellcasting eletum uses its Charisma modifier when making Concentration checks.

• Eleti base speed is 30 feet for Medium-size or 20 feet if they are Small.

• Darkvision: Eleti can see up to 60 feet without any source of light. Darkvision is black and white only, but otherwise it functions just like normal sight.

• Immunities: Eleti are immune to cold damage and take only half damage from piercing or slashing weapons as they lack internal organs.

• Turn and Rebuke Undead: Eleti are subject to turning attempts by clerics and paladins. For purposes of turning, the eletum possesses a number of Hit Dice equal to its class levels. Turn and rebuke attempts have their normal effects on eleti. If a turn undead attempt would normally destroy an undead of the eletum’s level outright, it receives a Will saving throw (DC 10 + cleric’s class level + cleric’s Charisma modifier). If the save fails, the eletum is destroyed. Even if the save succeeds, the eletum is still subjected to the turn effect.

• Command Undead: Successful command undead attempts allow the eletum a Will save (DC 10 + cleric’s class level + cleric’s Charisma modifier). If the Will save fails, the cleric may control the eletum as if by a dominate person spell. If the save succeeds, the eletum is able to retain control, though it is still affected as if by charm person.

• Automatic Languages: Casta and Common. Bonus Languages: Any (other than secret languages, such as Druidic). Eleti may encounter any sorts of creatures during their travels and often learn to speak a broad variety of languages.

• Favored Class: Fighter. A multiclass eletum’s fighter class does not count when determining whether it suffers an XP penalty for multiclassing.