Archmage, ex-member of the Circle of Eight

Tenser is medium-sized, with brown hair and an aquiline nose. He is always dressed in blue. He is polite and outgoing, but is willing to enforce his will on others for the sake of Law and Good.

Tenser makes his home in the Fortress of Unknown Depths on the southern shore of the Nyr Dyv, near the village of Magepoint, only a few days ride from the Free City of Greyhawk.

Tenser was born 525 CY, purportedly in the Wild Coast town of Fax. At some point after 551 CY, he was recruited by Mordenkainen and Bigby to join the Citadel of Eight. After the death of his good friend and fellow Citadel member Serten in 569 CY, the Citadel dissolved. Tenser joined forces with Bigby and Mordenkainen once more in 574 CY when he joined the Circle of Eight, replacing Leomund.

In 570 CY, Tenser accompanied Bigby and Neb Retnar beneath Greyhawk Castle in an unsuccessful attempt to prevent Robilar, Riggby, and Quij from freeing the demigod Iuz.

In 579 CY, Robilar sacked the Temple of Elemental Evil, freeing the demoness Zuggtmoy in the process. In retribution, Tenser, Otis, Rufus, and Burne led an army of good-aligned forces in pursuit of his former companion, following him back to his castle and laying siege to it, defeating his armies and driving them from the Domain of Greyhawk to the Pomarj.

In 581 CY, Tenser accompanied Bigby, Drawmij, Jallarzi Sallavarian, Nystul, Otiluke, Otto, and Rary to the tomb of Halmadar the Cruel. Every member of the party died that day, though they were brought back to life later through the agency of clone spells.

The Circle was betrayed in 584 CY, when Tenser, Bigby, and Otiluke discovered a plan by the Circle’s own Rary to slay a number of diplomats assembled in Greyhawk to sign the treaty ending the Greyhawk Wars. Unfortunately, Rary witnessed their discovery, and a great magical battle ensued, resulting in the deaths of Otiluke and Tenser, and severely wounding Bigby, who was unable to pursue Rary as he escaped. Word later came that Rary’s allies, among them former Citadel member Lord Robilar, had ensured Tenser’s and Otiluke’s deaths by destroying every clone they had prepared for such an incident. Rary and Robilar fled to the Bright Desert, southeast of Greyhawk, where they established the Empire of the Bright Lands.

However, Rary and Robilar had failed to discover a clone Tenser had hidden away on Celene, one of Oerth’s moons, and in Goodmonth of 585 CY Tenser was restored to life. Though he was welcomed back into the Circle, Tenser refused.

At least one of Tenser’s current schemes involves the collection and eventual destruction of the frog-sculpture keys guarding the Demon Lord Anoor’s dimensional prison. 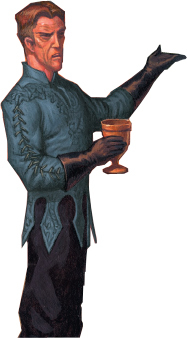