Maerk was created in the city of Muulantis in 593 C.Y., and showed an early aptitude for the clerical arts. Accepted by the Temple of the Scarlet Skull, he quickly rose within the ranks. In 600 C.Y., he had a number of visions involving a lost minor artifact known as the Hammer of the Lifebringer.

While the Hammer is technically the province of Jascar, he’s convinced that the visions were sent by Wee Jas, and he is determined to recover it for the glory of the Green-eyed Lady. He has since traveled the world seeking the Hammer. Recent clues have pointed towards it being in the hands of the followers of Wastri. 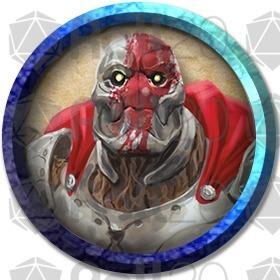