Khelben stands just over 6 feet (1.83 meters) tall and is well-muscled. He usually dresses in robes, wielding his trademark Blackstaff. As of 1374 DR, he had a full beard; black hair with silver streaks, including a prominent one through his beard; and a distinguished, imposing manner. He often dresses in black with a silver torque and a cape lined in gray fur.

Often thought to be humorless and grave, Khelben is actually neither. He simply finds it easier to deal with people if they are intimidated by or even frightened of him. He has numerous apprentices, and likes to encourage young people who display an aptitude for magic. Wielding the Art could be a gravely dangerous business, however, and Khelben tried to instill appreciation of that fact in his pupils by keeping up his “stern taskmaster” facade.

Khelben “Blackstaff” Arunsun (pronounced: /ˈkɛlbɛn ˈɛərʌnsʌn/ KEL-ben AIR-un-sun) is the Lord Mage of Waterdeep, a masked Lord of Waterdeep, and powerful archmage. He resides in Blackstaff Tower.
One of the few spellcasters to become one of Mystra’s Chosen, and the last survivor of House Maerdrym, Khelben is a serious, imposing wizard, and a grim proponent of law and order whose methods of achieving the ultimate good are often highly questionable in the eyes of the righteous. 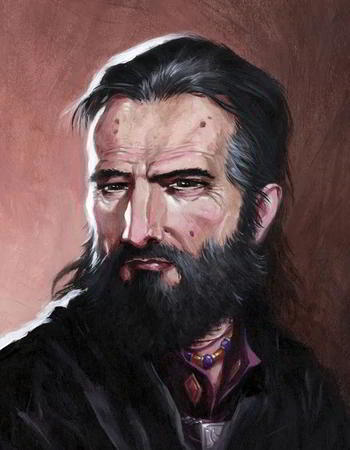