Jallarzi is an attractive woman in her mid-forties. She stands 5’, 7", and her pale skin and curly honey-blonde hair betray her nearly pure Suel heritage. She prefers comfortable clothes of silk or satin, often wearing fashionable breeches rather than skirts. Her outfits are often complemented by a pair of bracers of red dragon hide, set with bloodstones and bound with platinum filigree.

Jallarzi Sallavarian is a powerful human wizard of Greyhawk City and the only female member of the Circle of Eight. She is nearly always accompanied by her familiar, a red pseudodragon named Edwina. Jallarzi lives with her servants and Edwina in an exquisite tower in Greyhawk’s Garden Quarter.

Jallarzi was born in 549 CY into a minor noble family in the Duchy of Urnst. In her teen years, she studied magic under both the Seer of Urnst and Warnes Starcoat.

Sometime in the 570s, Jallarzi made her way to Greyhawk, where she studied under, and became good friends with, Tenser the archmage. Thanks to her training and natural talent, Jallarzi soon became the youngest wizard ever inducted into Greyhawk’s Society of Magi. At some point during this period, Jallarzi became fast friends with another female mage, a native of Greyhawk named Marial, and also began a romantic relationship with Kieren Jalucian, master of Greyhawk’s Guild of Wizardry.

In 581 CY, thanks to heavy lobbying by Tenser, Jallarzi became the youngest, and first female member of Circle of Eight, filling the seat left empty by Bucknard two years before. That same year, during the last week of her probationary period, Jallarzi, Tenser, and all the other members of the Circle save Mordenkainen were slain by Halmadar the Cruel, possessor of the Hand and Eye of Vecna, in the Kron Hills. Halmadar was under the control of Vecna himself, who sought to increase his divine power.

Once Vecna’s plans were thwarted by adventurers recruited by Mordenkainen, the archmage began reassembling the Circle by cloning its fallen members. By the time the clones had matured and become aware, the Greyhawk Wars were in full swing.

At the end of the Wars in 584 CY, the Circle was sundered once more, when Rary’s treachery resulted in the deaths of Tenser and Otiluke, as well as the destruction of all their clones, save one Tenser had hidden on the moon. In Goodmonth 585, Jallarzi was kidnapped, at the direction of Iggwilv, by Tuerny the Merciless, in a plot to create a distraction which would draw the Circle away from Iggwilv’s true plan—to invade Oerth via a gate between Tenser’s Fortress of Unknown Depths and an old lair of Iggwilv’s on Luna. Tenser’s clone on Luna had by this time matured, though it was discovered by Tuerny and transformed into a dretch. Tuerny had transported Jallarzi to the moon by this time, using dark magic to change her alignment, and gender, transforming her into an entity calling himself “Jay.” Both Jallarzi and Tenser were rescued by adventurers recruited by the Circle, and restored to their former states. Tenser left the Circle at this time, though Jallarzi stayed. 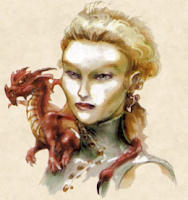