Chapter One, Session 04: The Claw of Fu Leng

We picked back up where we left off, in the middle of a battle with the hag, who , after calling for aid in the form of three hellhounds that rose from the earth around the altar, promptly used her innate Invisibility, Pass Without Trace, and Pyrotechnics to cover her escape. After slaying the hounds, they realized that she was long gone and searched her hut.

The hut proved to be a pit of debauchery, where the bodies of two more dead dwarven children were found freshly butchered. The only item of note found inside was the staff she had brandished to drive them south before (Cortana would eventually Identify the staff as imparting the feats Ley Line Magic, Howling Spell, and Ley Line Walker).

Meanwhile, Kirigaya investigated the altar at the base of the crater, discovering (and promptly shattering) a dagger made of hematite. He very much wanted to destroy the altar, but it was too heavy to budge. It was eventually decided that the Songbird should be brought to bear on the problem, which it accomplished by tying the altar, lifting it 500’ into the air, and then dropping it onto the hag’s hut.

Returning to Hadrik’s Folly, the group explained that while they had likely broken the hag’s base of power in the area, she had escaped and would likely return to work more misery against the town soon enough. While several members of the group clearly wanted to pursue the hag, Katsushiro clearly disapproved, and only his vow to protect and defend the Ambassador brought about his somewhat lackluster agreement to embark on the mission. After reviewing some maps of the local area, the group decided that the hag’s coven, if it were nearby, likely was based in the hills further southwest of the crater, along the same ley line the town and the crater shared. (The crater itself had served as a nexus for three ley lines).

On returning to the crater, it was quickly discerned (by Cortana, using her new staff) that one of the ley lines had already drifted free of the nexus, and that the remaining one would likely soon follow suit. Advancing along the stable line soon brought them to a low range of hills, one of which proved to have a number of fallen stone pillars near a cave entrance whose details were occluded by a spell of permanent Darkness. venturing into the cave proper soon found the group faced by three branches; the leftmost having a breeze of fresh air, the center the scent of brimstone, and the right the stench of decay. The group chose to explore the center. Zeshyn remained with the Songbird as guard.

Another 60’ of gentle downward travel brought them to a chamber with a spiral stone staircase hewn into the center of its floor. The stairs led another 200’ downwards, ending abruptly in a large cavern (it’s full dimensions eventually being discovered as being 100’ wide, 250’ long, with a ceiling of 50’). the remains of the collapsed stairs could be seen scattered on the ground beneath. A piton was driven into the wall, a rope attached, and the party descended…

One feature which quickly caught the eyes of the party was a formation of black jade located near the center of the cavern. Several members recognized it as a representation of the Claw-hand of Fu Leng, the Dark Kami who not only brought about the formation of the Shadowlands, but had been it’s erstwhile ruler since before the formation of the Empire of Rokugan. 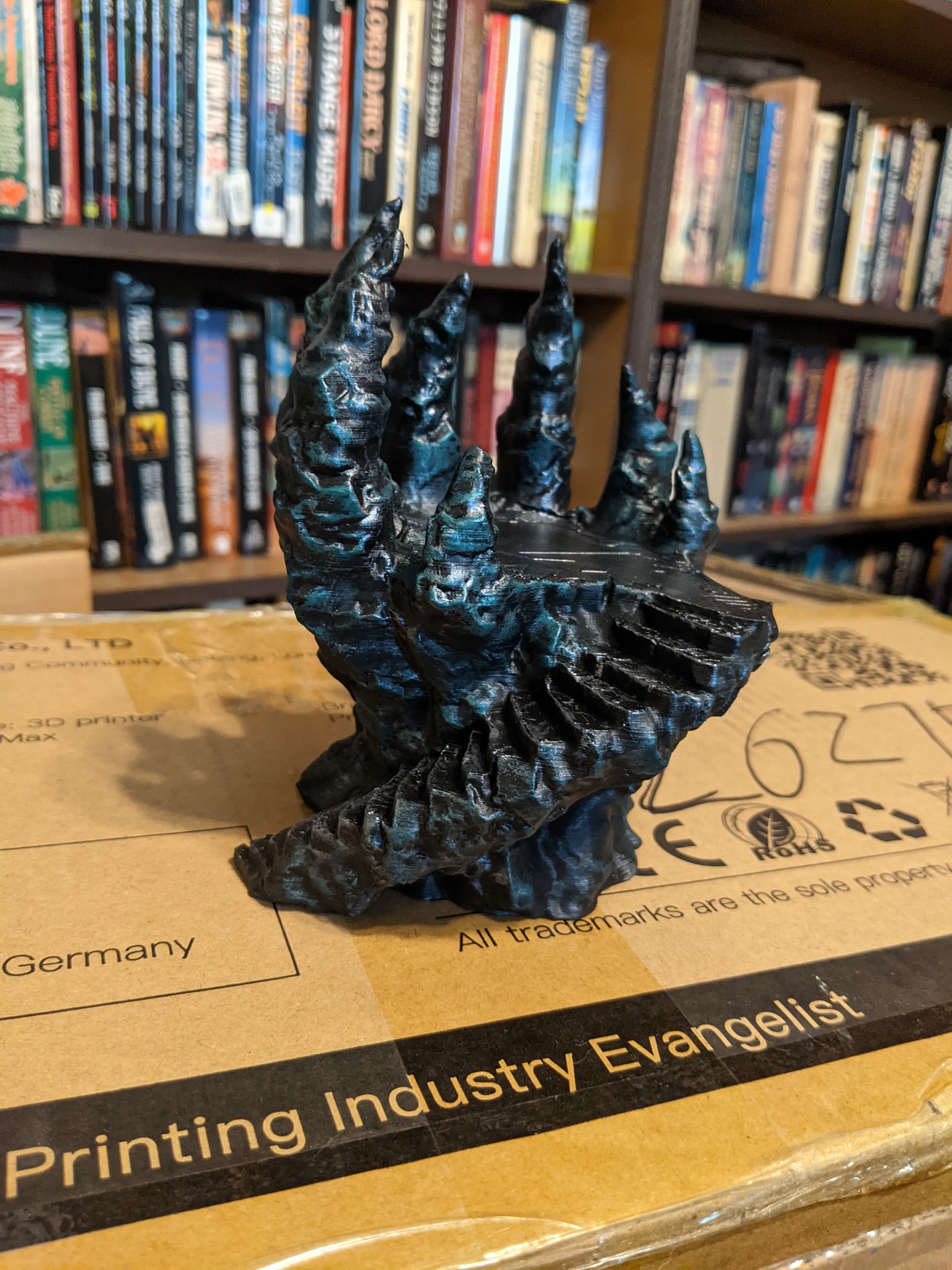 A deepening cold affected the party as they approached the formation, making their breath visible. Standing atop it, Kirigaya noticed a network of small aqueducts overhead, that emptied themselves into a raised basin at one of the far ends of the cavern. Numerous stone buildings also surrounded the Claw, most of which were empty and deserted, but several showed signs of recent occupancy, based at least on bare footprints in the dust and other indications. One building, however, was a bit cleaner than the rest, and they found two notable locations inside. One small chamber held a pile of skulls (mainly Human and Dwarven, but a few Nezumi as well), and another had a trapdoor that led down to a chamber larger than the house itself.

Said chamber had two walls of books and scrolls (mainly histories written in Nezumi), and two murals. One depicted the fall of Fu Leng and his “unification” of the Shadowlands. The other was a quabbalistic pattern showing magical symbols and strange portraits. While searching that wall for hidden doors, Ozawa touched one of the portraits, failed a save, and soon was heard having a one-sided conversation with a voice in his head, a voice that was predicting the death of his older brother in a year’s time and his younger sister’s claiming the family’s titles for herself; why should this happen, the voice asked, when Ozawa was clearly more worthy?

Exiting the basement and emerging once more into the cavern, the group quickly spotted the figure of a young woman in a diaphanous gown (that seemed to flutter in a breeze no-one else could feel) standing atop the Claw. She hailed them, identified herself as Atamma, the Guardian of this cavern, and told the party that they could not depart while “Munil” rode in the mind of Ozawa. However, the spell she cast to ‘free’ Ozawa of his possession instead put his consciousness to sleep and left Munil in charge of his body. Combat quickly ensued.

Cortana quickly put Ozawa/Munil to Sleep, while the rest of the party brought Atamma down, her death revealing her as the hag that had escaped them before. Exiting the underworld and returning to the Songbird, they returned to Hadrik’s Folly, informed the headman that the hag had been dealt with, and sailed northwards once more, finally sailing over the Wall and eventually arriving at Kyuden Hida, the capital of the Crab Clan.

Chapter One, Session 06: Blades in the Night

Chapter One, Session 05: Baby Shark, Do do do